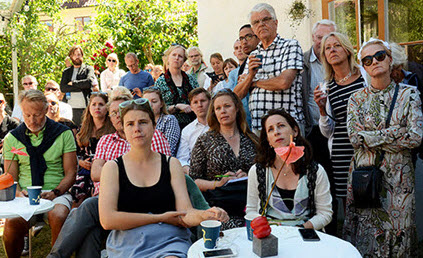 PwC's tax seminars caught the eye in Visby. The week was, however, thin in terms of tax news in politics. Certain comments and suggestions were significant and worth noticing.

"It's a great idea!" said Sweden's Minister of Finance Magdalena Andersson regarding wealth tax when she commented on the OECD's recommendation that Sweden reinstate the former property tax, wealth tax and inheritance and gift tax. However, the Minister of Finance stated that there is no question of reintroducing these taxes at this time. "The Swedish people do not want the same property tax model as before and a functioning wealth tax is technically difficult to implement," she explained. The Left Party also demands that the wealth tax is reinstated. In addition, they want to invest SEK 100 million a year so the Swedish Economic Crime Authority and the Swedish Tax Agency can establish a task force against tax evasion.

From this, it can be assumed that these taxes will be assessed when there is a new tax reform. During the past year, Magdalena Andersson has clearly stated that it is time for a new tax reform.

New Start Jobs and waived employer contributions for recent arrivals or newly recruited staff is what the Liberals and the Centre Party propose in the area of taxation. The Centre Party's proposal is to reduce taxes by SEK 11 billion. This is a major reform! The question of how to come up with more simple jobs has been the question which was discussed the most during the week. The suggested solutions have largely been to do with tax and social security contributions.

The Moderate Party did not mention taxes in their economic seminar on the issues which will affect Sweden in the future.

The hottest corporate tax issue right now concerns the rules for closely held companies. These rules are now being examined by the so-called 3:12 Committee, which will present its proposals on 1 November this year. In the run-up to the decision the Confederation of Swedish Enterprise presented an interesting report which is very constructive and positive, "Vad händer med entreprenörsskatten?”.

Tax planning come to the fore thanks to FAR. The guiding principle is that it is the right tax according to law which is to be levied and paid. Tax is a cost and, also, therefore, a competition issue between companies. There was consensus on this between the Swedish Tax Agency and the business community, as well as consensus on the view that aggressive tax schemes are not a current trend. Transparency is now the guiding principle.

Riksbankens Jubileumsfond raised the issue of the impact of high marginal tax on the economy and how this can be reduced. The researchers understandably had different views on the dynamic effects of a cut and the necessary funding of such a cut. But the question was well introduced on the agenda.

Tax for sharing economy businesses was discussed by, amongst others, Företagarna (the Swedish Federation of Business Owners). Resource utilisation argues in favour of the legislature focusing on simple tax solutions in this sector. The Swedish Tax Agency is examining the question and gathering views from PwC and others.

The Swedish Private Equity & Venture Capital Association raised the important question of how to secure workable employee stock options and long-term ownership. The Finance Minister was cautiously positive throughout the week.

Social entrepreneurship and philanthropy was a new and successful seminar! An increasing number of entrepreneurs want to continue their work or take a new direction to accommodate an activity that benefits society, offering new solutions to societal challenges. PwC highlighted some models and good examples!

There was record attendance at the seminar on How increased digitalisation affects taxation. A lot of new ideas were put forward here, and some were even snapped up by the Swedish Tax Agency It is no longer true to say that there are actually rules for these companies if, in practice, the rules are too difficult to apply. It should be easy to do the right thing, and Uber suggested that a transaction tax covering income tax, social security contributions and VAT with a franchise at the bottom could be the way forward.

A tax reform for entrepreneurship was this year's avant-garde seminar! PwC looked beyond 3:12 and employee stock options and put entrepreneurship on the agenda in preparation for the discussions on a new tax reform which are likely to continue into the autumn. In addition, Brexit offers possibilities for increased tax competition in Europe in terms of corporate tax. Can Sweden afford to challenge the UK who decided to cut the corporate tax main rate to 17 percent in 2020? This is a political question. The UK wants to have the lowest corporate tax among the G20 countries for the express purpose of attracting foreign investors. The Swedish Tax Agency's Director General, Ingemar Hansson, shared his view that this should be also Sweden's way forward.

See you after the summer for more discussions on these topics!