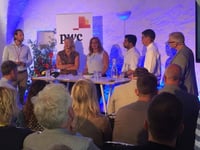 Does Sweden’s tax system need to be reformed in order to stimulate and create the premises so that innovative and dynamic growth companies can expand and succeed in Sweden? This question was discussed at PwC’s tax seminar in Almedalen on Tuesday.

Improved tax rules during the last ten years, together with an increased access to risk capital, have facilitated and supported the development of Swedish entrepreneurship. But we are now falling behind in this area.

Consequently, Sweden should discuss a tax reform to support entrepreneurship. The starting points for this discussion which I presented were the following:

A reform based on the above would provide Swedish entrepreneurs with internationally competitive tax rules. This is needed to ensure that our leading companies are not taken over and further developed outside Sweden, nor that they develop more slowly than need be within Sweden.

Pontus Braunerhjelm, of the Swedish Entrepreneurship Forum, presented a financing proposal including property tax, reduction of interest expense deductions, green tax swaps and a broadening of the tax base. Pontus also addressed the importance of a simple framework of regulations – increased simplificity results in increased entrepreneurship.

Åsa Hansson, University of Lund, stated that today’s tax system benefits large, established multinational groups, rather than smaller entrepreneur led companies. This is due to, amongst other things, the fact that newly started companies seldom produce a profit during their first years and cannot, therefore, benefit from the low corporate tax rate, plus that the interest expense deduction rules can, of course, only be utilised by those companies who can actually raise loans.

Solutions in the form of tax relief in order to help the smaller companies to survive and, thererby, achieve growth, were proposed, as was tax relief on the owners’ exit. A number of the participants agreed that entrepreneurs should, in fact, be given advantages, not the least due to the spin-off effects contributed by, growing companies to society, and also in consideration of the risks these types of companies assume. All of the speakers agreed that for this to happen, today’s tax legislation must be modernised.

The Tax Agency’s Director General, Ingmar Hansson, agreed that a broad tax reform would be good. He emphasised the importance of simplifying the tax system, that the tax system must be experienced as legitimate and that the difference between taxation of employment income and taxation of income from capital must decrease. Ingmar Hansson also stated that it would be positive if the corporate tax rate was further reduced, something with which the other panel members agreed – and this should happen, not the least, in order to increase Sweden’s attraction in terms of global competition.

Dagens Industri’s lead columnist, Tobias Wikström, concluded the discussions by emphasising the importance of a competitive Swedish tax system. A lot has happed since the last tax reform in 1990, not the least within digitalisation and globalisation. And this is something which, to a very great degree, affects our Swedish successful entrepreneurs.

The issue is far from being finally discussed but the debate about a new tax reform is underway and, this time, entrepreneurship will clearly be on the agenda.

Digitalisation and the sharing economy challenge today’s tax system…How do we face the future?

During PwC’s second tax seminar on Tuesday, there was a discussion about whether our tax system functions in relation to the new digitalised operations within, for example, the sharing economy which, in many cases, operates in an international environment. The Tax Agency described, by way of introduction, its view that there is no need of new rules in order to, today, actually, be able to tax players within the new sharing economy, but the rules can be difficult to understand and, thereby, also comply with. The Tax Agency is currently analyzing this area and its final sub-report will be presented in the autumn.

A number of the seminar’s speakers argued that the limits drawn between business operations and income from services must be clearer – when is someone seen to be an employee and when are they a business operator? For example, can a smaller player, at the same time that they are taxed for income from services (salary), also need to comply with obligatory VAT reporting due to the limited size of their operations? This is something which the new companies in the sharing economy do not recognise intuitively but which must be dealt with already, today.

There was agreement in the debate that it must be simple to comply when it comes to taxation. This can be achieved with the help of, for example, good instructions and a dialogue with the Tax Agency. In addition, it was stated that the companies providing platforms for the sharing of resources also have responsibility to ensure that their executors receive robust documentation and information for their tax reporting.

Alok Alström, General Manager for Uber in Sweden, shared proposals for simplification in the form of, for example, a standard transaction tax covering both VAT, income tax and social security contributions, alternatively, an exempt amount for smaller operations. He also presented the idea of implementing an integration of the Tax Agency’s technical platform and the companies’ technical platforms as a model for sharing information and, thereby, entirely elminating possible tax errors.

Multiple discussions at Almedalen regarding the sharing economy

Företagarna, the Swedish Federation of Business Owners, also discussed the sharing economy and its situation vis á vis today’s tax rules. Here, the panel agreed that the tax rules should not suffocate the development of these companies, while at the same time, there must be fair competition for the traditional companies.