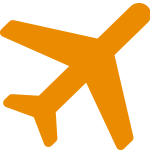 The proposal for tax on air travel presented to the government was formulated in terms of comprising a tax on commercial air travel. This proposed tax is to be paid by the airline company for passengers travelling from a Swedish airport in an aircraft which is approved for more than ten passengers.

The transport of passengers in military aircraft, other countries’ government aircraft, ambulance aircraft, search and rescue aircraft, aircraft used for humanitarian purposes and customs and police aircraft, is not to be covered by this tax. Furthermore, it is proposed that the air travel tax will not be applicable to children under two years, nor to passengers who, due to technical disruptions, weather conditions or other unforeseen events, have not reached the airport of their destination and who, subsequently, travel via a new departure. Neither is the tax to be paid by airline personnel in service during the air travel, nor transit and transfer passengers.

The airline executing the air travel is proposed to be the taxpayer. The liability to pay tax is proposed to arise when the aircraft takes off from an airport in Sweden.

The investigation proposes that the tax is levied on the basis of various tax levels which are dependent on the final destinations to which the passengers are travelling. 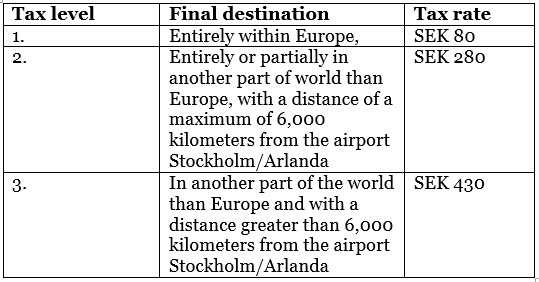 Net revenues added to state finances arising from the levy of the proposed tax are estimated at SEK 1.76-1.78 billion per year.

The Act on Tax on Air Travel is proposed to come into effect on 1 January 2018.