Yesterday, the Swedish government presented its proposal for new tax regulations for the corporate sector to the Council on Legislation. As seen in yesterday’s press conference with the Minister of Finance and the subsequent question period, the right of deduction for future interest expenses is one of a number of proposals which will impact Swedish companies’ tax situations.

Up until, and including, 2008, Swedish tax regulations granted companies full deduction of intra-group interest expenses regardless of the purpose of the loan in question, its origin or the lender’s tax position. As interest expense deduction was seen to be applied international tax planning and, thereby, comprised a threat to the Swedish corporate tax base, changes in the rules were introduced in two stages in 2009 and 2013 to apply to all interest expenses within a group of associated enterprises or a group. The major rule is, now, that interest expenses on intra-group liabilities, with certain exceptions, are not deductible.

The proposal in brief

The proposal now presented by the Government is modified compared with the previous work undertaken in this context by the Ministry of Finance. Basically, the current proposal implies, as expected, that a new general limitation on the right of deduction is to be introduced for negative net interest in the corporate sector. This also includes interest expenses to external lenders. The right of deduction will be based on a so-called EBITDA rule and will be combined with a decrease in the corporate tax rate. The existing framework regarding deduction of intra-group interest expenses will, however, remain but the proposal implies modification of the rules.

In summary, the proposal implies the following:

The new regulations are proposed to come into effect on 1 January 2019.

The proposed limitation on interest expense deduction implies that the EU Directive against tax avoidance and OECD’s recommendation against base erosion and profit shifting (BEPS) are implemented on the basis of Swedish law.

At the time of writing this article, the Council on Legislation’s exposure draft had not been published which implies that this article is based only on yesterday’s press conference and that the legal details and formulations are, consequently, not known at this time.

The proposal presented by the Minister of Finance today has been re-worked and in some aspects the Ministry of Finance has also taken into consideration the strong criticism which certain groups/associations, referral parties, etc. have clearly shown towards the original proposal. Amongst other things, the new proposal means that companies with negative net interest less than SEK 5,000,000 can, overall, be seen to benefit due to the reduced corporate tax rate.
The Minister of Finance stated that the Ministry will follow-up the proposed changes and, as required, will revert with new proposals, amongst other things, as regards the possible introduction of a special exemption for public infrastructure investments.

Both national and international companies have all reason to monitor the continued legislation process in this context. A number of interpretation issues will arise and all companies should undertake a consequence analysis of how this proposal can impact precisely their operations.

Tax matters will, of course, revert in the near future with a number of analytical articles regarding this important topic. 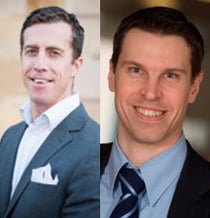 Johan Ahlqvist and Fredrik Richter work at PwC’s offices in Jönköping. Johan is responsible for the tax department in Jönköping and has many years of experience in tax advisory services as regards both Swedish and international corporate taxation, restructuring and transfer pricing. Fredrik works primarily with the restructuring of and taxation effects arising in the sale of so-called closely held companies, real estate, corporate taxation and international taxation.
Johan: +46 10 212 52 07, johan.ahlqvist@pwc.com
Fredrik: +46 10 212 52 37, fredrik.richter@pwc.com