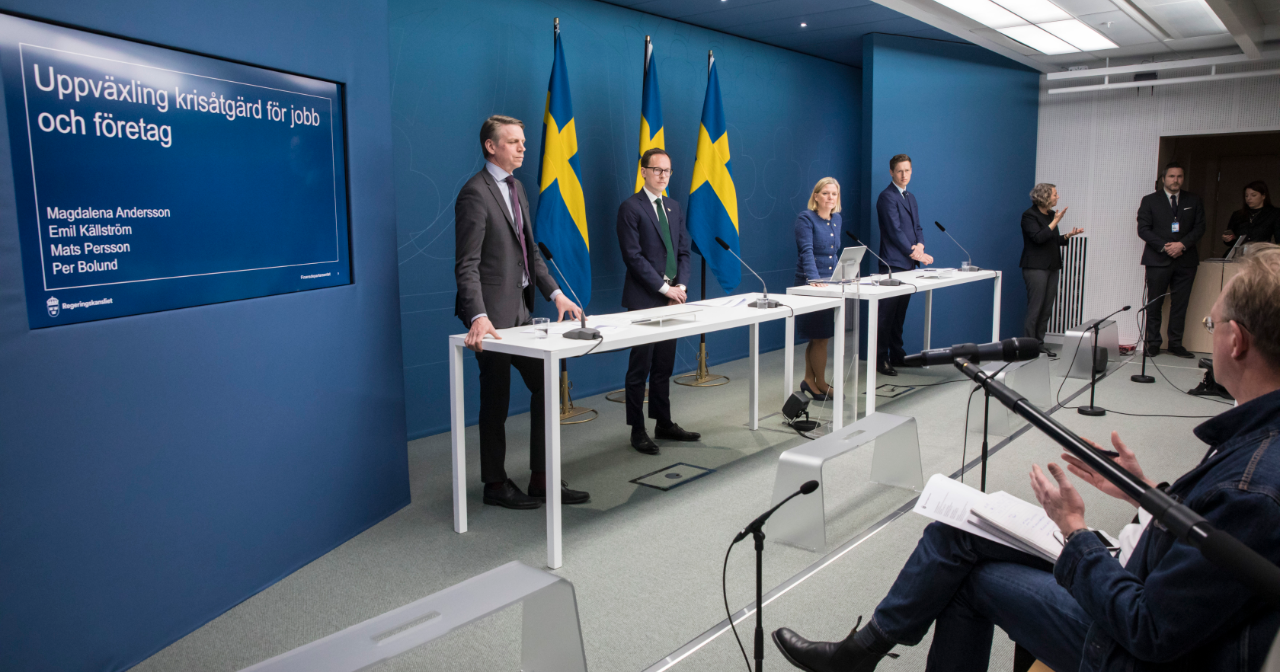 At a press conference in the afternoon of April 14, the Swedish Government presented additional measures to support Swedish companies. A lower interest rate for postponed tax payments and more generous rules regarding short-term work are some of the proposals.

Here is a summary of the support measures presented by the Government on April 14.

According to existing rules, which came into force on 7 April, companies can apply for support for short-term work for employees according to certain set levels (20, 40 or 60 percent reduction in working hours). The aid will be paid to companies that can show serious and temporary financial difficulties due to covid-19.

This support measure has been popular among Swedish companies and so far more than 24,000 applications, corresponding to support of approximately SEK 9 billion, have been received. 16,000 of these applications have already been processed.

However, some criticism has been made against the rules regarding the lack of possibility to introduce short-term work at other levels, which is now being addressed by the government. The proposal is now strengthened so that shortening of working hours can be done by 80 percent (the employee works 20 percent) while the employee retains 88 percent of his salary.

The strengthened regulatory framework for short-term work applies for May, June and July 2020. This means that, in combination with the reduced employers' contributions, the state will bear up to 86 percent of labor costs in May and June.

In addition, resources are provided to carry out additional checks to prevent cheating within the framework of support for short-term work. Among other things, checks must be carried out to ensure that the employees do not actually work more than what has been agreed with the employer, for example through the inspection of staff lieutenants.

The proposal for the enhanced support will come into force in May, but will apply retroactively from 1 May.

In addition to the extended rules on short-term work, the Minister of Finance announced that the Finance Committee has agreed on a reduced interest rate on deferred payment of tax.

On March 16 the original proposal, that companies can apply for deferral with a three-month payment of the provisional tax on salary and employer contributions and VAT respectively, was presented. The deferral is valid for a maximum of 12 months and will be allowed unless special reasons are raised against it.

In the original proposal companies that were granted a deferment would pay an interest rate of 1.25 percent plus a deferral fee of 0.3 percent per commenced calendar month. Since the interest rate is not tax deductible, in practice this meant an interest expense of 6.6 per cent on full utilization of deferrals, which many companies and even the Swedish Parliament's Finance Committee considered to be too high.

On April 14, the Finance Committee announced that the parliamentary parties had reached an agreement to lower the cost of postponement. According to the agreement, the total cost of deferral will more than halve to about 3.1 per cent. According to the agreement, only a 1.25 percent interest rate will be charged during the first six months of the delay. Thereafter, a deferral fee of 0.2 per cent is added per month. This corresponds to a deductible interest rate of 3.1 percent per year, or 1.6 percent in the first half of the year, expressed as annual interest. Compared to the current regulations, this means halving the total interest rate level. The Ministry of Finance is now preparing a memorandum to be sent for referral. We are monitoring the issue and will be back with updated information.

The interest rate on deferred payments of payroll tax and employer contributions and VAT, respectively, will be lowered from the current rate of 6.6 per cent to in practice approximately 3.1 per cent on an annual basis. This is a very welcome addition to the support measure. Many companies have hesitated to apply for a deferral, considering that the cost of deferring has been perceived as high.

Furthermore, many have been pondering the Board's possible representative responsibility for unpaid taxes during the deferral period, but here the Swedish Tax Agency has previously provided a reassuring message.

However, the fact remains that it is only a deferral of payment. When the deferral period expires, companies must pay the current taxes. But in combination with more generous rules regarding short-term work, this can hopefully be a well-functioning crisis action for the entrepreneurs in Sweden.

At PwC we want to help companies through these times of insecurities. We have set up a free hotline where you can call and get answers to your questions related to the government's support measures and other covid-19 related business issues.