In previous articles, we have described the proposal to introduce the concept of “economic employer” to the taxation of non-resident employees who are working temporarily in Sweden. In a recently issued press release, the government announced that it would proceed with the proposal and intends to present a more detailed draft at a later date. The provisions are expected to come into force on 1 January 2021.

The original proposal was presented by the Swedish Tax Agency and referred to the Council on Legislation for consultation, but nothing ever came of it.

In June 2017, the Tax Agency presented a memorandum with a proposal to introduce the concept of “economic employer” into Swedish tax legislation. Under the proposal, more people employed by foreign companies would be liable to pay tax in Sweden. The memorandum also contained a range of other proposals affecting foreign companies.

The memorandum was referred to the Council on Legislation for consultation in June 2018, but a bill was never drafted. The 183-day rule is included in Swedish law as well as the tax treaties signed by Sweden. Under this rule, an employee may be tax exempt in Sweden, even when they have performed their services here, provided that three conditions have been met. The employee must not spend more than 183 days in Sweden over a 12-month period, their remuneration must be paid by a non-Swedish employer, or on their behalf, and remuneration may not be paid from the permanent establishment of the employer here in Sweden. Since Sweden currently applies the concept of “formal employer”, the 183-day rule does not apply unless the employee is employed and remunerated by a foreign company with no permanent establishment here, even when the Swedish company benefits from, and bears the costs of, the services rendered. Many other countries apply the “economic employer” concept, whereby the company that benefits from, and bears the costs of, the services is regarded as an employer. As a result, the 183-day rule cannot be applied when a company is domiciled in the country where the services are performed, and also benefits from, and bears the costs of, those services. 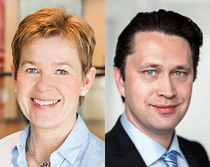